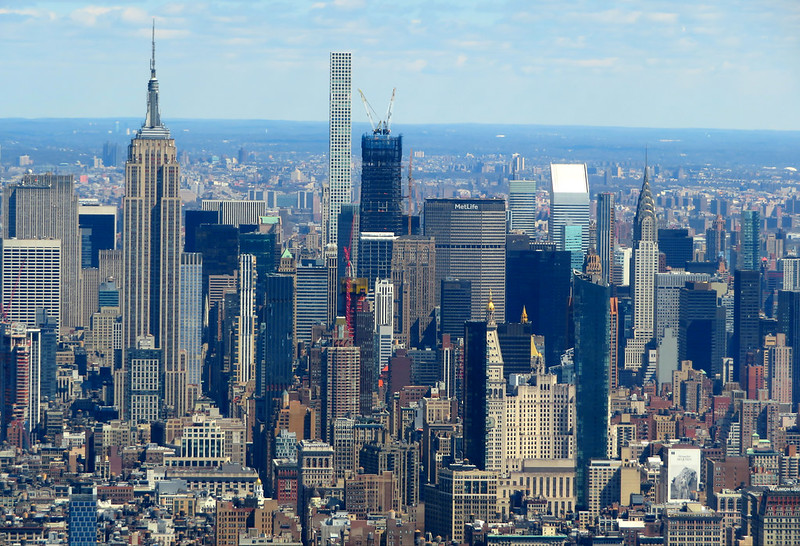 New York City’s history, culture, architecture, food, monuments, museums, and a host of other attractions have given rise to a multitude of tours. If you decide to view the city on your own, you should consider a few of these self-guided tours of the Big Apple.

New York is a city that can easily overwhelm you, so begin by finding a hotel near an area that you’d like to explore, which is easily done using the services of Gogobot. From there you can launch your exploration of the city.

This tour will take you to the Federal Reserve Bank of New York, the site of the World Trade Center (WTC), the Trinity Church and Cemetery, the New York Stock Exchange, the Banker’s Trust Company Building, the Trump Building, the Deutsche Bank, and finally to the “Charging Bull” sculpture. Finish up at Bowling Green Park, the oldest public park in New York City.

Midtown Manhattan is the area that most people envision when thinking about touring New York City. The area includes iconic landmarks that people have heard about or seen on television, including the Empire State Building, Times Square, Carnegie Hall, Rockefeller Center, and the Broadway Theater District.

Ranging between 31st to 59th Streets, and from Third to Ninth Avenue, Midtown is where the tallest and most luxurious hotels can be found. The Waldorf-Astoria and the Plaza are two excellent examples.

In addition to the headquarters of four television networks, Midtown also includes famous neighborhood areas, such as the Meatpacking District, Flatiron, Chelsea, and Hell’s Kitchen. A tour of this area would also include the Museum of Modern Art, Grand Central Station, Central Park Zoo, the Metropolitan Opera House, and St. Patrick’s Cathedral.

In the case of Lower Manhattan, the tour takes you to City Hall, Trinity Church, the Brooklyn Bridge, St. Paul’s Chapel, the Woolworth Building, and then on through many of the same sights of the Financial District Tour, including Wall Street, the WTC site, and Bowling Green Park.

Central Park is practically a world in and of itself. Self-guided tours are broken down into the North End, Mid-Park, and South End.

The North End takes you past Charles A. Dana Discovery Center, Harlem Meer (an artificial lake), the Conservatory Garden (divided into French, Italian, and English styles), and Fort Clinton (one of four fortifications designed to keep the British from invading Manhattan from the north).

Mid-Park takes you to Belvedere Castle, King Jagiello and Turtle Pond, the 3,500-year-old Obelisk (nicknamed “Cleopatra’s Needle“), and the Great Lawn at the center of the park.

The South End tour takes you to the Dairy, the Chess and Checkers House, the Wollman Skating Rink, and finally by the Pond and Hallett Nature Sanctuary.

There are literally hundreds of possible tours that a person could take; some through neighborhoods, others through buildings and attractions. Keep in mind that most of these tours can be downloaded to your smartphone and listened to while they guide you throughout the city that never sleeps.